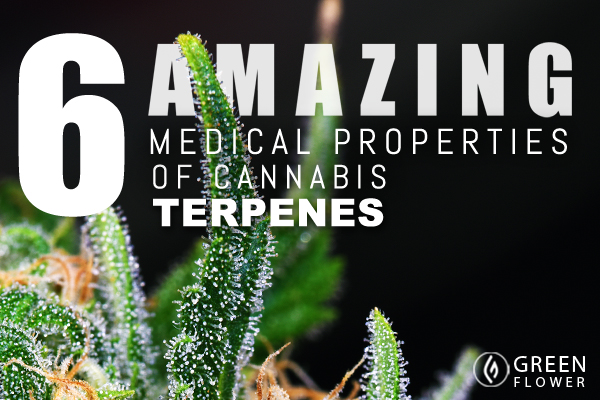 With at least 100 different terpenes having been identified in cannabis, these special compounds definitely deserve your attention.

At first glance, terpenes are the organic compounds responsible for the wide variety of fragrant flavors and smells in cannabis.

And that’s only the beginning.

Terpenes also have a synergistic effect with the other compounds in cannabis, essentially shaping the mood and feel of the cannabis experience.

This is why cannabis varieties with similar cannabinoid profiles can have completely different effects – all thanks to the strain’s unique terpene profile.

While we’re still discovering the full capability of these awesome plant molecules, we know they also bring their own medical benefits to the equation.

Myrcene is the most abundant terpene in cannabis. In fact, a study in Switzerland revealed myrcene composes up to 50 percent of the terpene content in the cannabis plant.

Categorized as a monoterpene, myrcene produces a spicy and herbal aroma. Myrcene is also plentiful in mango, hops, eucalyptus, thyme, and lemongrass.

Evidence suggests that myrcene reduces pain and inflammation. This may in part be explained by its ability to change the permeability of cell membranes. Acting as a regulator, myrcene can enhance or diminish the effects of other terpenes and cannabinoids.

This is why eating a mango before consuming cannabis can intensify the experience.

In fact, a study from Steep Hill Labs revealed eating a fresh mango 45 minutes before consuming cannabis accentuates the psychoactive effects. By allowing more cannabinoids to be absorbed by the brain, myrcene intensifies the effects.

Although our understanding of this terpene is limited, we do know that myrcene also possesses antibiotic, sedative, and antispasmodic qualities.

Need some stress relief? Linalool has been used in aromatherapy for thousands of years.

While best known for giving lavender its distinct scent, linalool is also present in cannabis varieties. This terpene produces a variety of effects and is most widely recognized for reducing stress.

A recent study involving lab rats and linalool also echoed these anti-stress effects. During the course of the study, the rats inhaled linalool while being exposed to stressful conditions. The researchers found that linalool actually helped return the rat’s stress levels to normal.

Linalool’s other properties include:

This is just a snapshot of the potential of linalool and its positive therapeutic effects.

Pinene is the most common terpene in the world (not just cannabis). In fact, there are actually two types of pinene – alpha and beta.

Chances are, you’re already familiar with the alpha variety. Alpha-pinene is found in pine trees and is responsible for the plant’s signature scent. It also happens to be the dominant pinene in cannabis.

Beyond scent, pinene provides a number of medicinal qualities.

A study from Northeast Forestry University in China found that pinene possesses potent anti-microbial qualities. The researchers concluded the terpene is so effective at treating bacterial and viral infections, pinene could even be used for bronchitis – a condition that is typically difficult to treat due to a resistance of antibiotics.

Some studies suggest pinene even has the ability to kill MRSA (methicillin-resistant Staphylococcus aureus) infections. This would be great considering that very few antibiotics on the market today are capable of this.

The medical efficacy of pinene also extends into cognitive capacities.

Indeed, pinene has shown to improve mental retention and focus. This is due to its ability to prevent the breakdown of acetylcholinesterase, an enzyme responsible for mental clarity and memory.

Limonene is a terpene characterized by its fresh citrus aroma.

It is the same terpene responsible for the fragrant scents of cannabis varieties such as Super Lemon Haze – and even that lemon-scented household cleaner in your closet (manufacturers of cleaning products, insect repellents, and perfumes have been utilizing terpenes for years).

Studies have shown that limonene promotes the healing of mucous cells in the digestive tract. In addition, it is also believed that limonene assists in the absorption of other terpenes throughout the skin and body tissue.

This could explain why limonene is so effective at treating gastrointestinal problems such as acid reflux and ulcers.

Exhibiting a woodsy and what many describe as a “hoppy” odor, humulene is another terpene that has been identified in the cannabis plant. It is also one of the most prominent terpenes in Humulus Lupulus or common hops, hence its name.

Humulene is unique though in that it acts as an appetite suppressant without the negative side effects many pharmaceuticals contain. In other words, this terpene may be a promising treatment for weight loss.

However, it is the anti-cancer properties that may prove to be game-changing.

A study in 2003 tested the effects of humulene in several tumor cell lines. The findings revealed that humulene has the ability to produce ROS (reactive oxygen species), which oxidizes cancer cells and slows their growth through apoptosis. Subsequent research studies also confirmed these effects of humulene.

In fact, one study revealed that when beta-caryophyllene (another terpene found in cannabis as well as black pepper) is present with humulene, the anti-cancer properties of humulene are exacerbated. Some studies suggest by up to 50 percent!

Once referred to as moxa, borneol was a terpene used throughout traditional Chinese medicine. From pain relief to stress relief, borneol is an ancient remedy. Present in cinnamon, wormwood, and cannabis – borneol contains an earthy aroma with hints of methanol.

Some experts believe that borneol was used in China as early as the 16th century. In fact, borneol was consumed throughout China and in other Southeast Asian countries for preventing cardiovascular disease.

However, until recently, very little was known regarding its effectiveness.

A study from 2008 revealed borneol possesses anti-coagulative properties. Which may explain why borneol is so effective at reducing the risk of heart disease.

Another study from 2014 also confirmed the positive impact of borneol on heart health. The findings from the study indicated that the synergetic effect of edaravone and borneol prevented rats from having a stroke. While the findings are limited as they have yet to be replicated on humans, the results are no less astounding. Especially given the long history of borneol within traditional medicine.

Terpenes and Cannabinoids Work Better Together

When looking for specific cannabis effects or treatments, it’s important to remember that terpenes and cannabinoids in cannabis work together to synergistically increase the potency of the plant.

This is what many refer to as the entourage effect, which explains why whole-plant cannabis tends to provide more medicinal benefits than isolated cannabinoids.