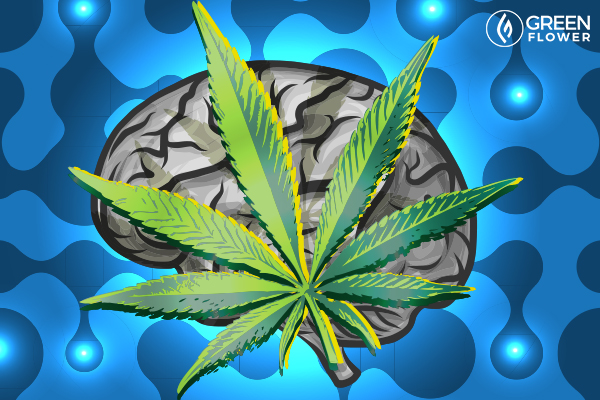 “A diagnosis of a brain tumor is probably one of the most frightening conversations that you can have with your doctor,” begins Mara Gordon.

Gordon is the founder of Aunt Zelda’s, a company which creates specialized blends of cannabis supplements for medical cannabis patients.

Over the past eight years, thousands of California cannabis patients have made appointments with the Aunt Zelda’s team to manage many different and complex medical conditions with cannabis.

But, it’s cancer patients who make up a large portion of the Aunt Zelda’s clientele.

“We don’t know a lot of people walking around years and years later after a diagnosis of brain cancer,” explains Gordon in a Green Flower segment. “The traditional treatments just do not work that well.”

Toward a New Approach 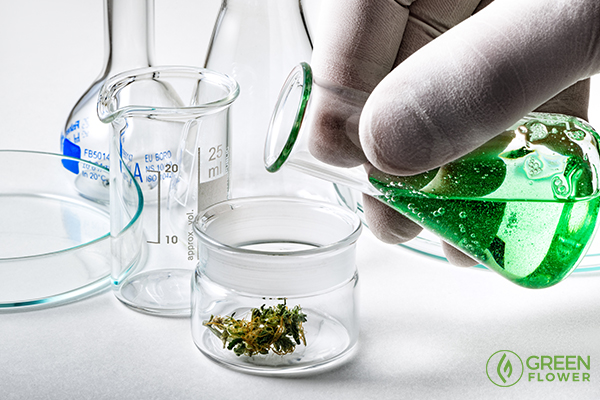 Cancers of the brain pose a particularly difficult challenge to oncologists.

Surgery, targeted radiation therapies, and advancements in chemotherapy have dramatically improved the outlook for cancer patients.

And yet, cancers of the brain still pose a significant challenge to oncologists, for one primary reason: many conventional chemotherapy drugs have difficulty making it into the brain.

The brain is protected by a blood-brain barrier, which is a protective blockade that lines blood vessels in the brain. This blockade is excellent for keeping pathogens and toxic compounds away from the vital organ.

However, the barrier can also prevent essential medicines, like chemotherapy drugs, from successfully making it to the targeted treatment areas.

For this reason, continuing research is vital for improved patient outcomes in the future. Apart from continued advancements in prevention and early screening, finding medicines that can effectively cross the blood-brain barrier is one potential research avenue.

Developing ways to deliver chemotherapy drugs to the brain effectively holds potential in enhancing the lives and improving outcomes in patients with brain cancers.

Amazingly, early research suggests that cannabinoids, the natural compounds found in the cannabis plant, stand a fighting chance at success.

The Nascent Science of Cannabis for Brain Cancer 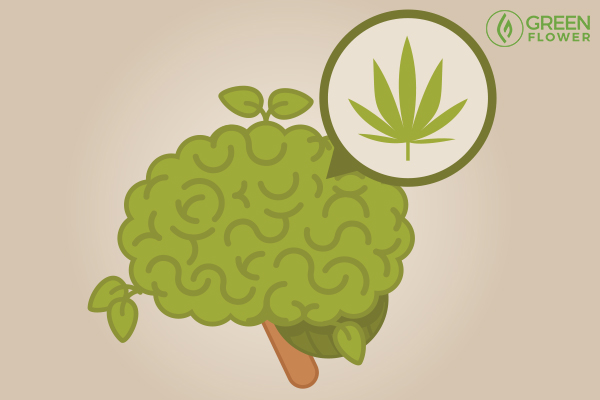 The American State of California first legalized medical cannabis in 1997. For the first time, patients with serious diseases, including cancer, had compassionate access to cannabis to ease symptoms of often devastating illnesses.

It is now widely accepted that cannabis can be used to ease suffering related to chemotherapy and other cancer-related symptoms. In the early 2000s, however, researchers began to question whether or not the herb could do something more.

Researchers in Israel, Spain, and various pockets of the world began to test the effects of isolated cannabis compounds on brain cancer cells cultivated in the laboratory.

The experiments were successful; cannabis compounds killed cancer cells outside of the body.

Next came animal trials, which were also successful. Cannabis compounds are small enough to cross the blood-brain-barrier, accessing tumor cells in a way that is often nearly impossible.

But, there’s a downside.

Cannabis research comes with one major caveat: most studies are conducted in Petri dishes and on rodents, not in human patients. Further, researchers test cannabis compounds on individual types of cancer, and not all tests garnered the same results.

Due to decades of legal research restrictions around the globe, experiments and trials of cannabis medicines in humans were nearly impossible.

It is only thanks to the recent public pushes for cannabis reform around the world that policy supporting cannabis science is beginning to change.

After positive results in early studies, British scientists got the go-ahead to continue with a small human trial. 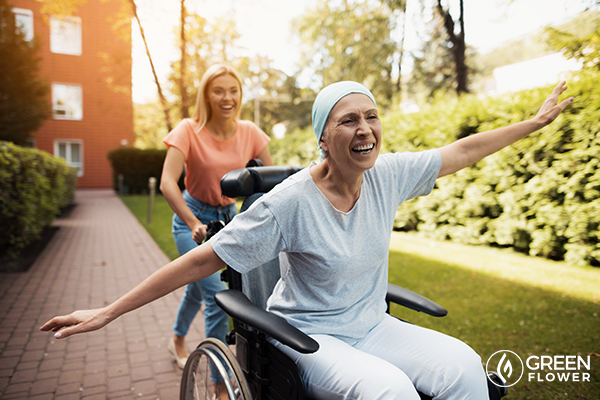 In 2017, researchers treated cancer patients with cannabis-derived medicine for the first time.  In the early proof-of-concept trial, 21 patients with an aggressive form of brain cancer, called glioblastoma multiforme, received a pharmaceutical drug made from cannabis extracts.

Patients with this form of brain cancer often receive an equally aggressive treatment protocol, including surgery, radiation, and chemotherapy. Even still, only an estimated 20 percent of patients experience long-term tumor control.

Worse yet, the average life expectancy for patients with this type of cancer is a mere 15 to 16 months.

In the trial, however, patients treated with the cannabis-based medicine appeared to have an advantage—they lived longer than those treated with chemotherapy and a placebo.

An additional six months, in fact.

GW Pharmaceuticals, a British biopharmaceutical company, conducted the trial. The company specializes in cannabis medicines and already has two successful cannabis-based pharmaceuticals on the market; one for the treatment of multiple sclerosis, and the other for epilepsy.

While many different life science companies are popping up to research medicinal cannabis, GW arguably has the most substantial lead on the competition.

The new drug used a combination of tetrahydrocannabinol (THC) and cannabidiol (CBD). THC is more famously known as the compound that causes the classic cannabis “high.”

CBD, on the other hand, is a non-intoxicating phytochemical more well-known for its ability to put a halt to life-threatening seizures.

Patients given cannabis medicine along with the chemotherapy drug, temozolomide, had an 83 percent one-year survival rate compared to those given the placebo, which hovered around 53 percent.

The small study mentioned above isn’t the only human trial conducted on cannabis for glioma. Back in 2006, a group of Spanish researchers tested the effects of THC in nine glioblastoma multiforme patients. Only, this time, THC was delivered through the skull.

In this trial, the patients did not see the same extended survival time as those mentioned in the GW Pharmaceuticals study above. Even still, researchers found evidence that THC administration increased the death of tumor cells.

Mara Gordon, who has been working on the frontlines of medical cannabis since 2011, tells Green Flower why cannabis medicines are promising for brain cancer:

“We have found that the brain is just filled with CB1 and CB2 receptors,” says Gordon. These receptors are the landing sites for cannabis medicines. They sit on the surface of cells and are triggered by the active components in the cannabis plant.

“So,” Gordon continues, “if your tumor is in your brain, you have a lot to target with cannabinoid therapy.”

The Aunt Zelda’s team are among the few who have witnessed the positive effects of cannabis supplementation on cancer patients firsthand.

Gordon and her team are not conducting formal clinical trials in the standard way. Instead, the group keeps a detailed record of the medical status of each patient as well as their precise daily dosage of cannabis medicines.

The Aunt Zelda’s team sees thousands of medical cannabis patients each year, despite the lack of hard science on the topic.

Patients who visit Aunt Zelda’s are treated to customized wellness regimens based on experience and the early knowledge gleaned from preliminary studies.

A Long Way from A New Cancer Treatment

While these early trials and reports are promising, they are far from enough to draw any firm conclusions. Cannabis has not been tested as an add-on treatment to chemotherapy in any meaningful way.

Further, the potential positive benefits of the plant are far from universally accepted by medical and scientific communities.

Plus, research thus far has focused intensely on cannabis for glioblastoma. There are many different types of brain cancers, and the herb may not have the same anti-proliferative effect in all of them.

Even the informal data gathered by the Aunt Zelda’s team indicates that cannabis seems to be more helpful for some patients than in others.

“There is one [type of brain cancer] that is called DIPG,” Gordon tells Green Flower, “and DIPG is in the brainstem. Unfortunately, there are just not [enough of the] CB1 receptors for the cannabinoids to activate in the brainstem, so it can be a lot more devastating.”

The potential anti-cancer ability of the cannabis plant is both astounding and exciting. It is crucial, however, to acknowledge that cannabis-based cancer medicines are still hopeful aspirations for the future.

Early experiments may seem promising, but they are far from comprehensive or conclusive. Doctors and scientists are still a long ways away from figuring out whether or not cannabis works as an anti-cancer tool. Let alone from developing ready-to-use cannabis medicines for patients to take now.

In the meantime, resources like Aunt Zelda’s are helping patients use the plant most efficiently. Even in difficult-to-treat DIPG, Gordon sees promise.

“We have found extended life and far, far greater quality of life when treating it with traditional medicine along with cannabinoids.”