CannabisNewsWire Editorial Coverage: Following the passing of the 2018 Farm Bill, CBD sales have continued their massive growth in the United States and beyond.

Wildflower Brands Inc. (CSE: SUN) (OTCQB: WLDFF) (WLDFF Profile) is among the companies benefiting from this market, with an increase of more than 300 percent in online sales for its CBD products last year. Some companies are specializing in particular niches, such as The Green Organic Dutchman (OTCQX: TGODF) (TSX: TGOD) with its focus on sustainable organic plants. Aurora Cannabis Inc. (NYSE: ACB) (TSX: ACB) is making moves into Europe, with cannabis oil sales in Germany and investment in a Portuguese grower. Green Growth Brands Inc. (OTCQB: GGBXF) (CSE: GGB) is launching new products and opening its own shops across the United States. And HEXO Corp. (NYSE: HEXO) (TSX: HEXO), which recently expanded from medical cannabis into the recreational space, has seen gross revenue increase more than 1,000 percent as part of this rising tide. 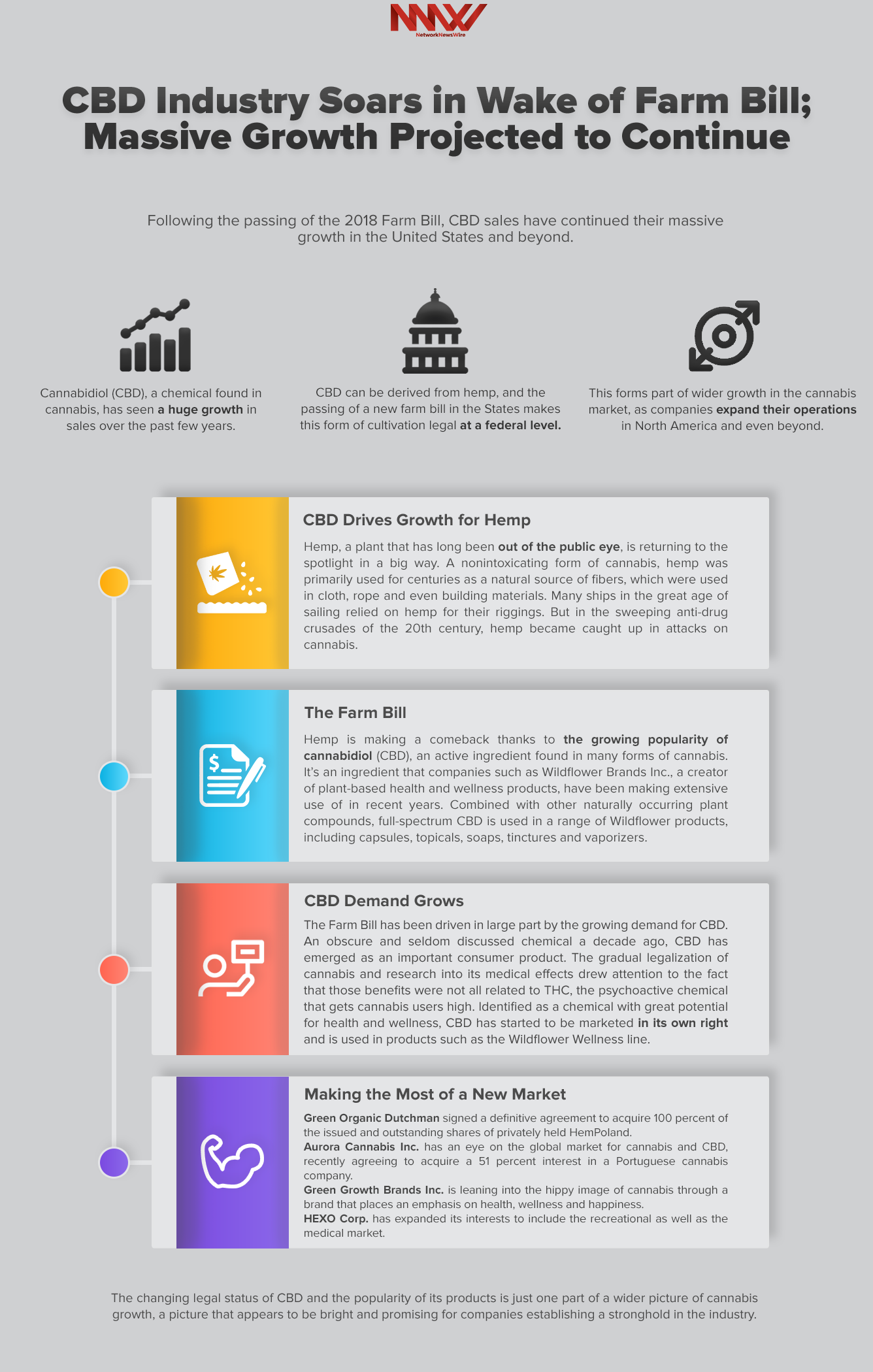 Hemp, a plant that has long been out of the public eye, is returning to the spotlight in a big way. A non-intoxicating form of cannabis, hemp was primarily used for centuries as a natural source of fibers, which were used in cloth, rope and even building materials. Many ships in the great age of sailing relied on hemp for their riggings.

But in the sweeping anti-drug crusades of the 20th century, hemp became caught up in attacks on cannabis. Campaigners who were determined to save consumers from their own pleasures had cannabis outlawed at a time when there was little effective way of distinguishing between hemp and other forms of cannabis. No longer needed for cloth and rigging, hemp was made illegal.

Now all that has changed — nowhere more dramatically than in the United States of America.

Hemp is making a comeback thanks to the growing popularity of cannabidiol (CBD), an active ingredient found in many forms of cannabis. It’s an ingredient that companies such as Wildflower Brands Inc. (CSE: SUN) (OTCQB: WLDFF), a creator of plant-based health and wellness products, have been making extensive use of in recent years. Combined with other naturally occurring plant compounds, full-spectrum CBD is used in a range of Wildflower products, including capsules, topicals, soaps, tinctures and vaporizers.

Until recently, the production of CBD in the United States faced serious restrictions and uncertainties. Many states had legalized the production of cannabis in some form, either for medical or for recreational use. In addition, there were licensed trials of the cultivation of hemp, which can be rich in CBD. But all of these plants were illegal at a federal level, meaning that even with state-level approval, cultivators faced financial limitations and the threat of government action.

All that changed in December with the passage of the 2018 Farm Bill. One of a regular series of bills governing the U.S. agricultural sector, this bill removes hemp from the list of controlled substances, making it unambiguously legal for farmers to grow hemp. This changes the landscape for CBD products in the States. Companies such as Wildflower, which has already got its products into many outlets in the health and wellness sector, will be able to expand their reach even further.

States have the right to set their own rules around restricted substances, and some states have taken an unsympathetic attitude to CBD. The Farm Bill doesn’t force states to change this attitude, but there are already signs that public opinion on all levels are changing. The regulations in many states assume adherence to the federal guidelines, and some states, such as Alabama, have already softened their stance since the Farm Bill became law.

Under the Farm Bill, hemp production will be tightly regulated. Most states already have existing regulations in place, and the U.S. Department of Agriculture will be developing its own regulations as well. But for an established company such as Wildflower, which already works in California, Washington and New York, this shouldn’t be a problem. Cannabis companies are accustomed to working in a tightly controlled environment and meeting the legal standards set by state legislators, as well as the product standards required by retail outlets. In that context, working within new federal regulations shouldn’t present a significant challenge, while the existence of consistent national standards will create opportunities for growth.

The Farm Bill has been driven in large part by the growing demand for CBD. An obscure and seldom discussed chemical a decade ago, CBD has emerged as an important consumer product. The gradual legalization of cannabis and research into its medical effects drew attention to the fact that those benefits were not all related to THC, the psychoactive chemical that gets cannabis users high. Identified as a chemical with great potential for health and wellness, CBD has started to be marketed in its own right and is used in products such as the Wildflower Wellness line.

Public interest in CBD has grown seemingly from nowhere. Tapping into interest in both cannabis and natural remedies, and offering treatments that may succeed where others have failed, CBD sales have soared. Hemp-derived CBD alone was a $390 million market in 2018 and is expected to reach $1.3 billion by 2022. And that doesn’t even include all the CBD products derived from other forms of cannabis.

The results for producers have been staggering. Wildflower saw its online sales grow by more than 300 percent in just nine months in 2018. In response, the company opened its first New York retail store, a sure sign of a product’s popularity in an age when so many companies are shedding their brick-and-mortar presence.

Looked at globally, CBD is in even better health. The Brightfield Group has estimated that CBD’s value will reach $5.7 billion this year and $22 billion by 2022. While research on the topic is still in its infancy, there is growing evidence that CBD could be used to treat a number of ailments, including certain extreme forms of childhood epilepsy. Even the United Kingdom, a country whose government remains staunchly opposed to the legalization of cannabis, has allowed the use of a CBD drug for this purpose.

Companies producing and selling CBD products are springing up across North America, Europe and beyond. Demand is growing, especially among millennials. That’s bolstering the impressive sales of companies such as Wildflower and putting pressure on politicians to further liberalize the laws around hemp.

Making the Most of a New Market

A lot of companies are now making the most of the growing popularity of cannabis, CBD and hemp.

Given the crossover between liberal attitudes on drugs and an interest in protecting the environment, it’s hardly surprising that specialist companies have arisen that grow organic cannabis. One of these is The Green Organic Dutchman (OTCQX: TGODF) (TSX: TGOD), which announced last year that it had signed a definitive agreement to acquire 100 percent of the issued and outstanding shares of privately held HemPoland in an immediate accretive cash-and-share transaction. The move gives Green Organic Dutchman access to HemPoland’s vast distribution network, premium Cannabigold brand, and state-of-the-art hemp oil extraction technologies, as well as providing a strategic pathway into the European market for TGOD’s medical and recreational products and licensing deals.

Canada is at the forefront of cannabis legalization, as one of the early adopters of medical cannabis and the first G8 country to legalize its recreational use. As a result, the country has developed several large cannabis companies, including Aurora Cannabis Inc. (NYSE: ACB) (TSX: ACB). Aurora has an eye on the global market for cannabis and CBD, recently agreeing to acquire a 51 percent interest in a Portuguese cannabis company, as well starting sales of cannabis oil in German pharmacies.

Like Green Organic Dutchman, Green Growth Brands Inc. (OTCQB: GGBXF) (CSE: GGB) is leaning into the hippy image of cannabis through a brand that places an emphasis on health, wellness and happiness. The company is doing well with the continuing CBD craze and has recently announced the opening of CBD shops in malls in Indiana and Tennessee. The company has also formed an agreement with another company to work on CBD-infused personal care products, as CBD product ranges diversify.

A leading cannabis producer, HEXO Corp. (NYSE: HEXO) (TSX: HEXO) has expanded its interests to include the recreational as well as the medical market. Focusing on cannabis’s place in the wider market, HEXO was the first cannabis producer to join Food & Consumer Products of Canada, a group representing the Canadian food, beverage and consumer products industry. This comes as the company announced a 1,269 percent increase in gross revenue compared with the same quarter a year before, growth exceeding even the impressive performance of the wider cannabis market.

The changing legal status of CBD and the popularity of its products is just one part of a wider picture of cannabis growth, a picture that appears to be bright and promising for companies establishing a stronghold in the industry.