One of the companies that may benefit from changes in the United States is Marijuana Company of America, Inc. (OTC: MCOA) (MCOA Profile), which works primarily in cultivating industrial hemp and developing CBD products. Tilray, Inc. (NASDAQ: TLRY), which has affiliates around the world, may use its global experience to adjust to changes in the United States. Research into cannabis by companies such as Cronos Group, Inc. (NASDAQ: CRON) (TSX: CRON) will become easier, eventually improving product ranges and patient well-being. The legislative shift is also being encouraged by companies such as PotNetwork Holding, Inc. (OTC: POTN) through efforts at public and industry events. And as industry leaders such as Aphria, Inc. (OTC: APHQF) (TSX: APH) swallow up smaller companies, a stronger, consolidated sector is likely to result. 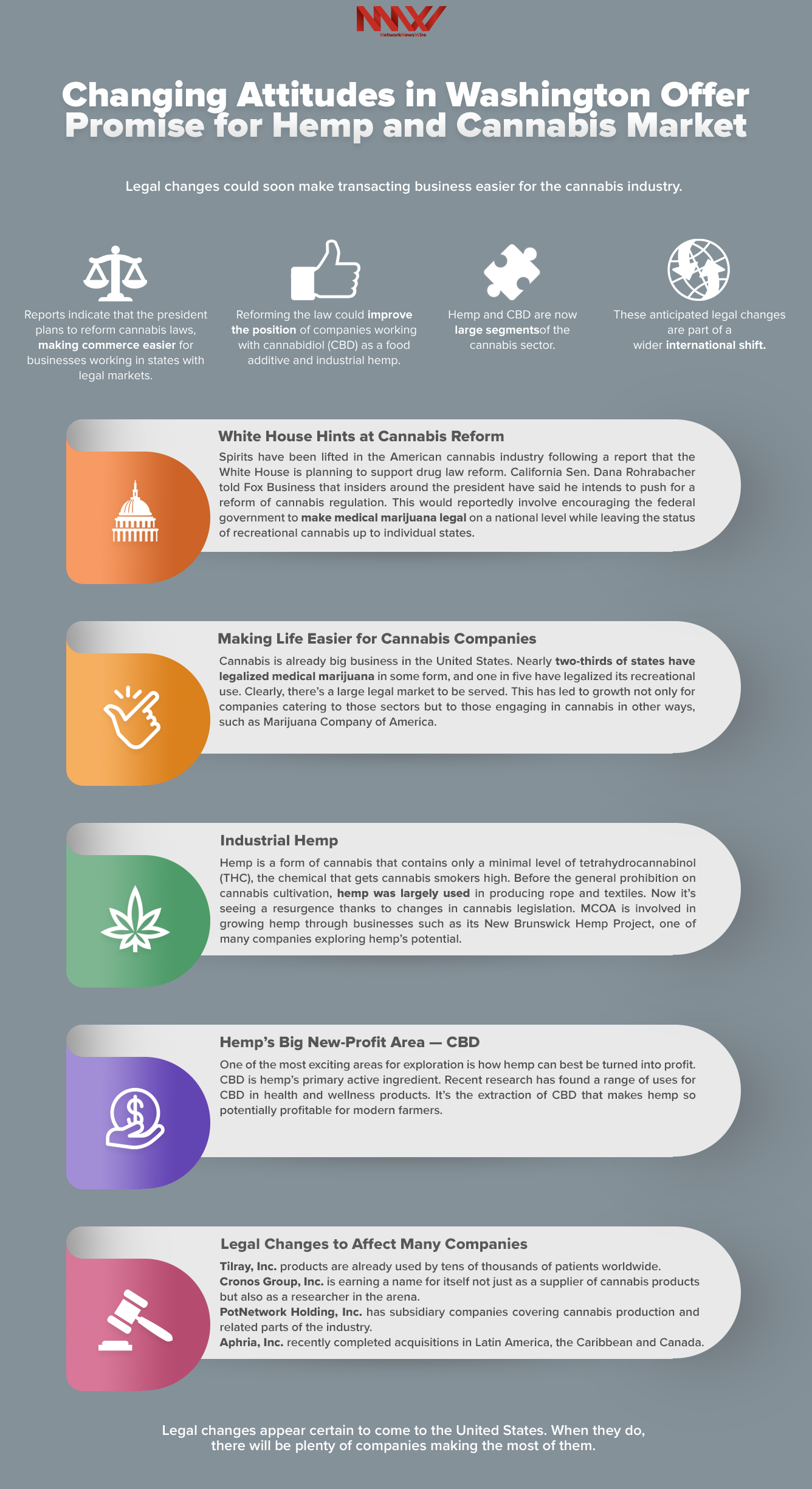 Spirits have been lifted in the American cannabis industry following a report that the White House is planning to support drug law reform. California Sen. Dana Rohrabacher told Fox Business that insiders around the president have said he intends to push for a reform of cannabis regulation. This would reportedly involve encouraging the federal government to make medical marijuana legal on a national level while leaving the status of recreational cannabis up to individual states.

The reasons behind Rohrabacher’s announcement are clear. As a Republican defending a closely fought seat in a pro-cannabis state, he stands to benefit from convincing his constituents that his party is pro-cannabis. But the stance is also part of a wider trend in politics.

A growing number of politicians from both main parties have shown support for legalization, driven by shifts in public attitudes. Polls this year have indicated that 64 percent of Americans support legalization and 74 percent support legislation that would protect states that legalize cannabis despite the federal government’s opposition. Always happy to ride a high-profile trend, President Donald Trump has previously indicated that he will support a states’ rights agenda on the issue, despite action in the opposite direction by his attorney general.

What will this mean for cannabis companies?

Cannabis is already big business in the United States. Nearly two-thirds of states have legalized medical marijuana in some form, and one in five have legalized its recreational use. Clearly, there’s a large legal market to be served. This has led to growth not only for companies catering to those sectors but to those engaging in cannabis in other ways, such as Marijuana Company of America (OTC: MCOA).

MCOA illustrates the variety of ways in which companies are now engaging in the cannabis sector. Rather than producing medical or recreational cannabis, the company has focused on varied uses of industrial hemp, a form of cannabis without the psychoactive qualities. Derivatives of hemp can be used in food, textiles, construction and medicines, making it a versatile and valuable crop.

Within that part of the sector, MCOA has a variety of operations. The company is engaged in two partnerships to improve plant strains and cultivation techniques, and sells a range of products derived from hemp. This range of business opportunities is part of what makes the cannabis sector so profitable, with a value in the billions of dollars in Canada alone.

The potential profits of the sector mean that ambitious companies such as MCOA have been able to raise finance through investment rather than through hard-to-come-by bank loans, which have been in short supply in the United States because of the federal government’s stance toward the plant. Clearing up the contradictions between state and federal laws would make business much easier.

One of the biggest growth areas within the current cannabis market may not necessarily feed into the medical or recreational cannabis markets. That sector is industrial hemp.

Hemp is a form of cannabis that contains only a minimal level of tetrahydrocannabinol (THC), the chemical that gets cannabis consumers high. Before the general prohibition on cannabis cultivation, hemp was largely used in producing rope and textiles. Now this space is seeing a resurgence thanks to changes in cannabis legislation. MCOA is involved in growing hemp through businesses such as its New Brunswick Hemp Project, one of many companies exploring hemp’s potential.

In the United States, hemp is currently grown legally on sites designated as research and test projects. This was made possible following the 2014 Farm Bill, which included provisions for such sites.The potential for that bill to be expanded this year to full agricultural legalization of hemp is expected to drive spectacular success for farmers who choose to cultivate it. Hemp can be grown outdoors in fields and will grow quickly in a wide range of conditions. Some farmers have predicted that they may see revenues of $90,000 per acre for the crop, compared with only $600 for alfalfa, one of the most popular crops in the United States.

The 2014 Farm Bill expired at the end of September this year, and the bill scheduled to replace it has not yet been passed, thanks to battles on a wide range of issues between Republicans and Democrats. Surprisingly, hemp is fairly noncontroversial. The plant has found cross-party support, with backing for legal reform driven by Republican leaders. As a result, provisions in the bill that would allow for more hemp farming will almost certainly be passed when work on the bill is completed after the November mid-terms.

The updated Farm Bill will make it easier for companies such as MCOA to expand their operations and sell their products. And following reports about cannabis law reforms coming out of the White House, the bill looks likely to become a herald of wider potential.

One of the most exciting areas for exploration is how hemp can best be turned into profit. CBD is hemp’s primary active ingredient. Recent research has found a range of uses for CBD in health and wellness products. It’s the extraction of CBD that makes hemp so potentially profitable for modern farmers.

CBD is already being used in a wide variety of products. MCOA’s hempSMART line alone includes pain capsules, a topical pain cream, face cream and pet wellness products. Legal changes will make it easier for companies to research and manufacture products such as these, broadening the scope of the CBD market.

Unregulated CBD grants companies more potential to go international, as its sale is less limited than that of medical and recreational cannabis. MCOA is currently preparing to launch hempSMART into Europe and has appointed a new global sales director to oversee this work.

Whether it’s the Farm Bill or President Trump’s promise to accept a revision of federal laws, the possibility of legal changes has the potential to affect a lot of companies working within the cannabis sector. State-level legalization and changes in Canada’s laws this month have allowed companies to emerge working entirely within this sector.

Like MCOA, Tilray, Inc. (NASDAQ: TLRY) is working beyond the boundaries of the United States. The company has affiliates in Australia, Canada, Germany, New Zealand and Portugal, and is now adding Chile to that roster through the acquisition of Alef Biotechnology SpA. Tilray’s products are already used by tens of thousands of patients as well as physicians and researchers around the world. That gives the company existing experience and infrastructure to expand in a reformed American market.

Another company with international reach — Cronos Group, Inc. (NASDAQ: CRON) (TSX: CRON) — is earning a name for itself not just as a supplier of cannabis products but also as a researcher in the arena. Cronos has recently announced a study into the effectiveness of medical cannabis in tackling sleep disorders. Such research will be both easier and more profitable as more countries legalize cannabis.

A sign of the power of the sector is the growing number of holding companies now built around cannabis. PotNetwork Holding, Inc. (OTC: POTN) is one of those, with subsidiary companies covering cannabis production and related parts of the industry. The company is reaching out to customers through large events such as the 2018 World Vapor Expo, designed to increase the profile of cannabis and remind those in power of the plant’s popularity. Such corporate PR work is increasing the momentum of the movement towards legalization.

The growth of the industry has also led to a series of mergers and acquisitions, as big players consolidate their hold. Aphria, Inc. (OTC: APHQF) (TSX: APH) recently completed acquisitions in Latin America, the Caribbean and Canada, bringing with them supply agreements reaching into Europe and Israel. Liberalization of cannabis laws is becoming a global trend, and as the businesses involved become bigger, so will the push for further reform.

Legal changes appear certain to come to the United States. When they do, there will be plenty of companies making the most of them.