Marijuana Company of America Inc. (OTC: MCOA) (MCOA Profile) is a pioneer in the hemp industry, with trial cultivation operations under way in Washington and a range of hemp-derived products on the market. Charlotte’s Web Holdings, Inc. (OTCQX: CWBHF) (CSE: CWEB) is also focused on hemp-derived cannabidiol (CBD) products and recently raised its profile through TV coverage. Even before the prospect of reform, CV Sciences, Inc. (OTCQB: CVSI) was seeing record profits this year and increased its profile by becoming a sponsor for the Hemp Industry Association’s 25th anniversary conference. Isodiol International, Inc. (CSE: ISOL) (OTCQB: ISOLF) is benefiting from changes not just in the United States but in Mexico, where new regulations will support its sale of diverse CBD products. The first publicly traded U.S. cannabis company, Medical Marijuana, Inc. (OTC: MJNA) is also seeing growth, with record sales and a continuing high profile. 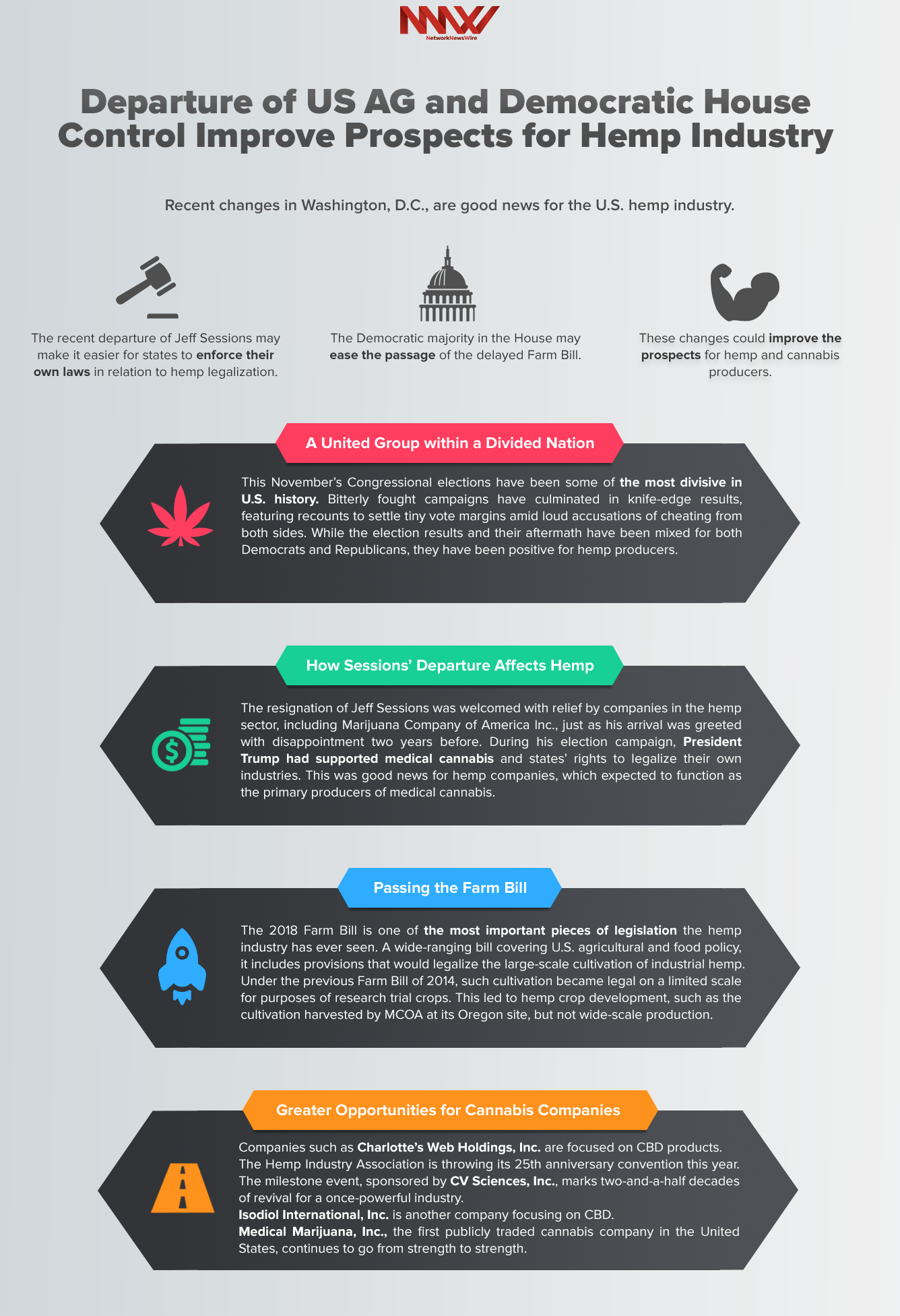 A United Group within a Divided Nation

This November’s Congressional elections have been some of the most divisive in U.S. history. Bitterly fought campaigns have culminated in knife-edge results, featuring recounts to settle tiny vote margins amid loud accusations of cheating from both sides.

While the election results and their aftermath have been mixed for both Democrats and Republicans, they have been overwhelmingly positive for one group — hemp producers. A Democratic majority in the House of Representatives may finally bring an end to months of bickering over this year’s Farm Bill renewal, leading to the expected federal legalization of hemp farming in the process. And the forced resignation of U.S. Attorney General Jeff Sessions, which President Donald Trump pushed once the elections were over, has removed one of the biggest stumbling blocks the industry faced.

The resignation of Jeff Sessions was welcomed with relief by companies in the hemp sector, including Marijuana Company of America Inc. (OTC: MCOA), just as his arrival was greeted with disappointment two years before.

During his election campaign, Trump had supported medical cannabis and states’ rights to legalize their own industries. This was good news for hemp companies, which expected to function as the primary producers of medical cannabis.

Hemp, which does not get users high and is useful for a variety of purposes, was banned by the sweeping laws of drug prohibition decades ago. Recent state-level reforms have allowed the establishment of projects such as MCOA’s hemp project in Scio, Ore, in conjunction with their joint venture partner Global Hemp Group Inc. But tension has existed for years between state-level legalization and the continuing federal prohibition on all forms of cannabis. Trump’s offer of reform appeared to be a solution.

Then Sessions came into office. As the government’s top law enforcement officer, he had the power to clamp down on all things cannabis related. And as a vociferous opponent of cannabis, that was exactly what he promised to do.

Though Sessions was not able to launch a new escalation of the war on drugs, his stance on the subject frustrated cannabis proponents. Even as brands such as MCOA’s hempSMART brought a state-legalized flood of hemp-derived products to the health and wellness markets, Sessions’ presence threatened to stifle the fast-growing industry.

However, the cannabis trade and surrounding industries continued to grow despite Sessions’ presence. MCOA is a shining example of an industry-savvy company that has recognized opportunities for growth and development in an industry that reached an estimated value of $9 billion in 2017 and is expected to reach over $47 billion by 2027. The company developed a distinct hemp derived CBD brand — hempSMART™ — and established high yielding hemp cultivation farming projects in the United States and Canada while also investing in Moneytrac Technology, a business providing financial and support services for the cannabis industry.

However, federal restrictions have created uncertainty for companies. By this fall, the White House was hinting at taking a more liberal stance. While this could be seen as a political ploy to balance Sessions’ presence in the minds of cynical cannabis-conscious voters, it also hinted at divisions within the government. It’s hardly surprising with a populist president like Trump. With 64 percent of Americans supporting legalization of cannabis and 74 percent supporting states’ rights to legalize, Sessions was up against the popular view on a widely discussed issue. Though both his appointment and his departure were driven by other factors, his absence opens the way for cannabis reform. And in fact, cannabis companies’ stocks initially rose when the news was announced.

But Sessions’ departure wasn’t the biggest issue for hemp companies such as MCOA. These companies are also closely watching what is happening in the House.

The 2018 Farm Bill is one of the most important pieces of legislation the hemp industry has ever seen. A wide-ranging bill covering U.S. agricultural and food policy, it includes provisions that would legalize the large-scale cultivation of industrial hemp.

Under the previous Farm Bill of 2014, such cultivation became legal on a limited scale for purposes of research and trial crops. This led to hemp crop development, such as the cultivation harvested by MCOA this fall at its Oregon site, but not wide-scale production.

The hemp provisions in the 2018 bill are set to change that. Given their potential to offer a profitable new crop for struggling farmers in Republican-held districts, the provisions have gained cross-party support and ensured a place in the bill.

Unfortunately, other provisions have been more controversial. Arguments over how to allocate federal food assistance and how to deal with illegal immigration stalled the bill earlier in the year, and arguments over who will benefit most from the funds have prevented compromise in the months that followed. The future of hemp companies such as MCOA has been in limbo thanks to issues that have nothing to do with hemp.

With the Democrats about to gain control of the House, that appears likely to  change. The biggest hurdle to passing the bill is House Republicans’ desire to set tougher controls for allocating food stamps. But neither Democrats nor Senate Republicans favor these strict rules, so a Democratic majority in the House and the Republican-majority Senate could break the impasse and pass a bill. This has also given Republicans more incentive to pass the bill while they still have power to shape its outcome in the House.

This change is great news for MCOA. As an industrial hemp company, its operations have so far been limited by the provisions of the 2014 Farm Bill and legalization in specific states. The legalization of hemp will allow it to expand its existing cultivation, set up new operations and more easily sell its products into markets across the country.

Plenty of hemp and cannabis companies across the United States will be seizing opportunities created if federal prohibition ends. Many of these companies, such as Charlotte’s Web Holdings, Inc. (OTCQX: CWBHF) (CSE: CWEB), are focused on products using CBD. Its widespread use in health and wellness products has propelled these companies into the limelight, with Charlotte’s Web CEO Hess Moallem appearing on CNBC to talk about the growth of CBD and cannabis businesses in the country.

Politicians’ willingness to change their stance on hemp is unsurprising given the growing momentum behind the industry. The Hemp Industry Association is throwing its 25th anniversary convention this year. The milestone event, sponsored by CV Sciences, Inc. (OTCQB: CVSI), marks two-and-a-half decades of revival for a once-powerful industry. The sponsorship opportunity has been hugely beneficial for CV Sciences, which saw record sales and gross profits in the third quarter of 2018.

Isodiol International, Inc. (CSE: ISOL) (OTCQB: ISOLF) is another company focusing on CBD. Its products cover a wide spectrum of uses, including sleep aid, pain management and skin needs. While the political changes in the United States appear positive for Isodiol, the company has also been closely following events in Mexico, where it has distribution agreements with several companies specializing in pharmaceuticals. At the end of October, Mexican authorities published new regulations covering CBD products. These allow hemp to be used in cosmetics, food supplements and herbal products, as well as in medicines. Based on these changes and its established agreements, Isodiol expects to start sales in Mexico in early 2019.

Medical Marijuana, Inc. (OTC: MJNA), the first publicly traded cannabis company in the United States, continues to go from strength to strength. Its subsidiaries have been exhibiting at events across America this year as it continues to develop its profile. Like CV Sciences, it has recently seen record sales as the cannabis and CBD markets grow across North America and beyond.

The hemp industry is growing around the world but, with change in the cards in Washington, America appears set to stay at the forefront of the industry.